IELTS Ac. Writing Task-1 Questions with Answers – FREE 2 Charts/ 1 Chart and 1 Table
In Progress
You should spend about 20 minutes on this task.
The graph and table below show the average monthly temperatures and the average number of hours of sunshine per year in three major cities. Summarise the information by selecting and reporting the main features and make comparisons wherever relevant.
Write at least 150 words.

Total hours of sunshine for London, New York and Sydney

The data provides information on average temperatures and annual hours of sunshine in London, New York and Sydney.

The temperature patterns of London and New York are similar, although New York has warmer summers and colder winters. In both cities, peaks occur in July/August, at 23° in London and 29° in New York. In contrast, Sydney’s hottest weather is in December/ January when temperatures average 25°. During this period, New York’s temperatures dip to an average of around 5° compared with 8° in London. On the other hand, Sydney’s lowest average temperatures in July are Just over 15°.

As far as hours of sunshine are concerned, New York and Sydney have similar averages of 2,535 and 2,473 hours respectively. London, however, has much lower average of 1,180 hours.

Clearly, London is the coldest city and has the fewest hours of sunshine. New York has the hottest summers, but Sydney enjoys the warmest overall climate.

You should spend about 20 minutes on this task.
The chart below give information about the high-speed continuous internet connection of households in five countries in 2001 and 2002. Summarise the information by selecting and reporting the main features and make comparisons wherever relevant.
Write at least 150 words. 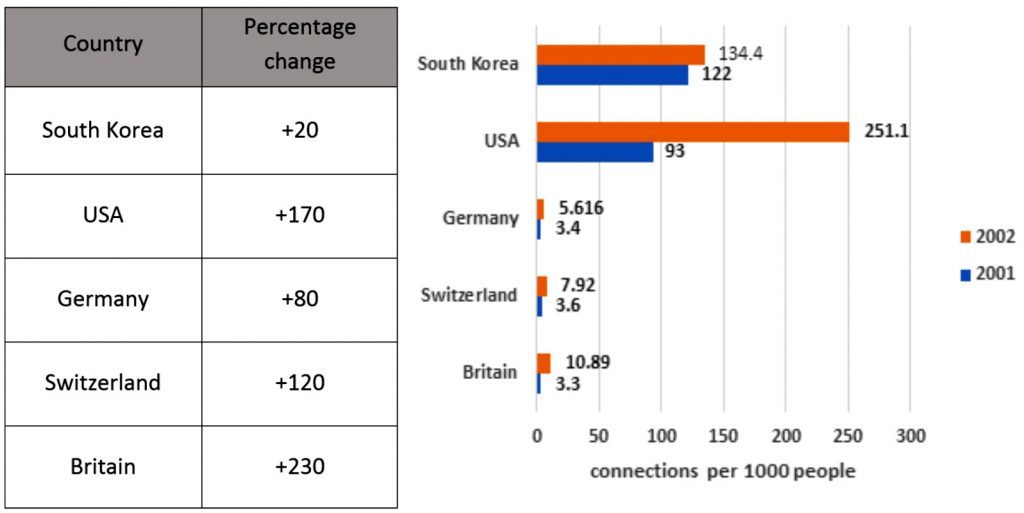 The bar chart and table compare five countries in terms of the percentage of families with high-speed internet access, and the change over two consecutive years, from 2001 to 2002.

In 2001, about 11.2% of South Korean households had access to high-speed internet, compared to 9.3% of US families. One year later, the number of US families with high-speed internet soared by 170% to reach 25.11% of the population, which was the highest figure of all measured countries for those years. By contrast, the growth rate was significantly lower in South Korea, at only 20%.

High-speed internet was not as common in Germany, Switzerland and Britain, with only roughly 0.35% of households having a high-speed connection. All three countries saw significant increases over the year, with Germany and Switzerland witnessing increases of 80% and 120% respectively. Meanwhile, Britain saw the biggest growth rate in high-speed internet connections with a 230% increase.

You should spend about 20 minutes on this task.
The table and line graph shows Cinema visits for different age of groups. Summarise the information by selecting and reporting the main features and make comparisons wherever relevant.
Write at least 150 words. 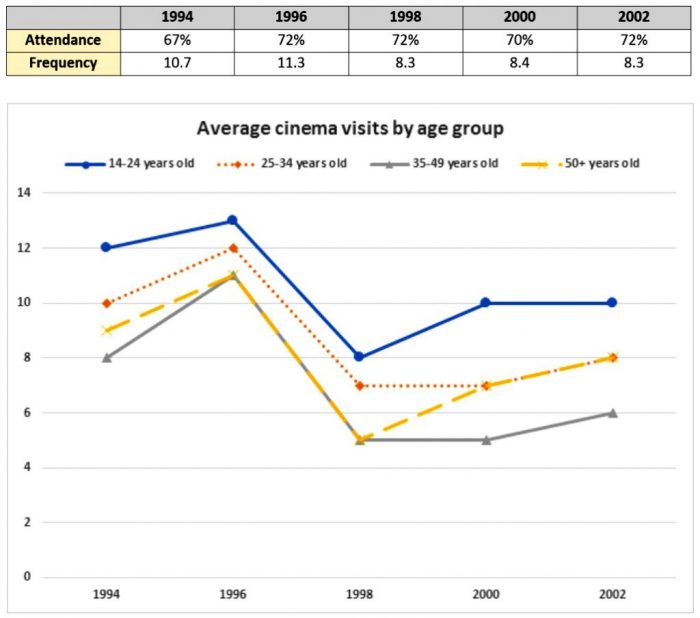 The table illustrates the percentage of Australians going to the cinema and their frequency from 1994 to 2002, and the line graph presents how many visits were made according to age group.

It is clear that the percentage of cinema attendants increased, while the average number of visits decreased over the period shown. Additionally, all age groups witnessed fluctuations in their figures, and 14-to 24-year-olds were the most frequent cinema visitors.

Initially, the youngest group went to the cinema 12 times yearly, followed by 10 times of those aged 25 to 34. In contrast, the figure for the oldest group was lowest, at only 8 times per year. In 1996, the figures for all groups rose by about 1 time before decreasing by nearly 5 times in 1998. After that, the quantity of visits of each group grew slightly but the most regular visits still belonged to the youngest group, with about 10 times.

You should spend about 20 minutes on this task.
The table and chart below provide a breakdown of the total expenditure and the average amount of money spent by students per week while studying abroad in 4 countries. Summarise the information by selecting and reporting the main features and make comparisons wherever relevant.
Write at least 150 words. 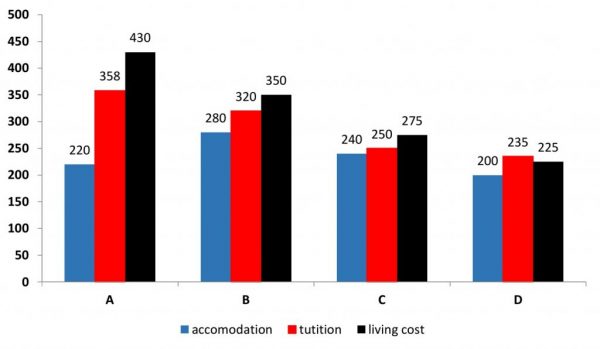 The table and bar chart illustrate the total spending and the average expenditure per week for accommodation, tuition and living costs of students studying abroad in four countries.

Overall, it is clear that the cost of studying in country A is the highest. Also, international students in all countries, except for country D, have to pay the largest amount of money each week for living costs, while they spend the least on accommodation.

Studying abroad in country A costs $875, which is $140 and $335 more than studying in country B and C respectively. International students in country D, however, need to pay a significantly lower amount of money ($435) than those studying in the other three countries.

You should spend about 20 minutes on this task.
The charts show average levels of participation in education and the highest education level of adults from 2000 to 2010 in Singapore. Summarise the information by selecting and reporting the main features and make comparisons wherever relevant.
Write at least 150 words. 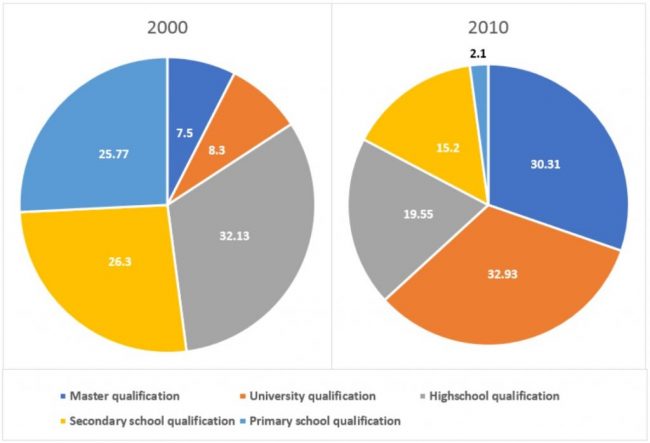 The bar chart illustrates the average number of years males and females attended school, while the pie charts present the diﬀerent levels of education achieved by adults in Singapore in 2000 and 2010.

Overall, there was an increase in the number of years, for both males and females, that were spent on education. It can also be seen that the figure for males was slightly higher over the period shown. Additionally, the level of education people were attaining had increased over the period.

According to the pie charts, in 2000, almost one-third of Singapore’s population finished high school. The figures for those who only finished primary and secondary school were quite high, at approximately 26% each, compared to less than 10% of Singaporeans who had gained a bachelor or master’s degree. However, the level of education people were attaining had increased over the ten year period, with nearly two-thirds of the population obtaining a university degree, and only 2.1% leaving after primary school.