IELTS Ac. Writing Task-1 Questions with Answers – FREE Two Tables
In Progress
You should spend about 20 minutes on this task.
The table below gives information about the temperatures and hours of daylight during the same weekend in two cites in May 2007. Summarise the information by selecting and reporting the main features and make comparisons wherever relevant.
Write at least 150 words.

The tables show diﬀerences in the temperatures and daylight hours in Mumbai and Moscow in a particular weekend in May 2007.

Overall, In Mumbai, the temperatures recorded over three consecutive days were relatively consistent, whereas those in Moscow witnessed significant changes. In addition, despite being warmer, Mumbai enjoyed fewer hours of daylight compared to Moscow.

In Mumbai, the temperatures were nearly the same from Friday to Sunday, with the highest figure being 33.4C and the lowest one being 15C. The average number of daylight hours was approximately 13 hours, with the sun often rising at about 6AM.

Meanwhile, the temperature was much colder in Moscow. The maximum temperature during the day was 17C on Friday, and slightly lower on Saturday and Sunday, at 13C and 15C respectively, which were twice as low as the temperature in Mumbai on the respective days. The minimum temperatures recorded during this weekend were between 2C and 8C. The average number of daylight hours in this city was more than 16 hours, from around 5.30am to 10pm.

You should spend about 20 minutes on this task.
The tables show the average salaries of graduates and non-graduates in the UK in 2010. Summarise the information by selecting and reporting the main features and make comparisons wherever relevant.
Write at least 150 words. 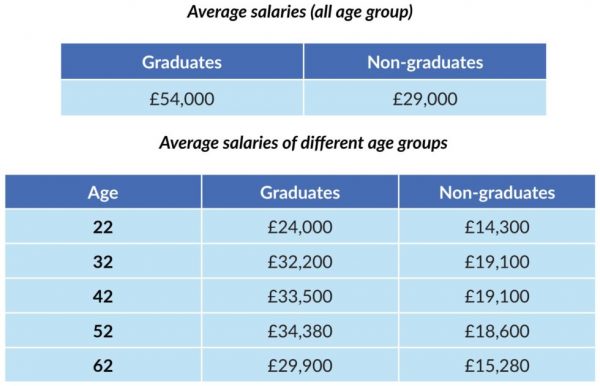 The tables compare the average salaries of graduates and non-graduates in the United Kingdom in 2010.

In general, the average salary of graduates was much higher than that of non-graduates. Additionally, both graduates and non-graduates, aged between 32 and 52 years-old received the highest salaries.

You should spend about 20 minutes on this task.
The tables give information on the temperatures and the hours of daylight in two particular cites in the same week in May 2007. Summarise the information by selecting and reporting the main features and make comparisons wherever relevant.
Write at least 150 words.

The tables compare data regarding the temperatures and daylight hours in Mumbai and Moscow, during the same week in May, 2017.

Overall, it can be seen that Mumbai was significantly hotter than Moscow, however, Moscow experienced much longer daylight hours.

As for the hours of daylight, the sun rose in Mumbai every day at 6.00 am, and set between 7.05pm and 7.15pm. However, Moscow received a lot more daylight hours, with the sun rising between 4.05am and 4.15am each day, and setting at 10pm each of the recorded days. Additionally, Saturday had the longest amount of daylight hours in both cities.

You should spend about 20 minutes on this task.
The tables give information about the average hours work by part-time and full-time men and women in three countries in Europe in 2002 and compare them with the European countries. Summarise the information by selecting and reporting the main features and make comparisons wherever relevant.
Write at least 150 words.

The provided tables illustrate the breakdown of the average time men and women in three European nations worked in full time and part time positions, in the year 2002.

Overall, males worked more than their counterparts in both types of jobs. Apart from this, Greek people spent more time working than those from the other countries.

As for the average working hours of full-timers, Greece topped the list with nearly 40 hours for females and 42.5 hours for males. This was followed by the Netherlands with 38 hours for both genders. Meanwhile, 37 hours was the total amount of time women in the UK allocated to their work, slightly lower than that of men with 37.5 hours. In general, in this category, male workers in Europe worked more than female individuals.

Regarding the figures for part-time workers, it is noticeable that those from Greece still held the highest position in the list with 29.3 hours for women and 30 hours for men. Similarly, UK males also had more part-time hours, at 29, compared to 28 hours for females. Conversely, a reverse trend can be seen in the numbers of men and women in Netherlands, with 28.3 hours for the former and 29.2 hours for the latter.

You should spend about 20 minutes on this task.
The tables below show results of a survey of urban residents’ opinions related to various aspects of life in 1980 and 2010. Summarise the information by selecting and reporting the main features and make comparisons wherever relevant.
Write at least 150 words.

The tables compare the data of how residents in an urban area assessed six different aspects relating to their life in the years 1980 and 2010.

Overall, most people had good opinions about all the given categories. Apart from that, education and healthcare were the most highly-ranked, while shops, transport, environment and accommodation received the highest amount of negative feedback.

In 1980, 82% of respondents said that education was good, while 75% and 72% of people rated the shops and environment as also being good. Meanwhile, only 54% and 56% of surveyed individuals said they were satisfied with the transport system and accommodation. They were, however, the two aspects having the greatest number of neutral opinions, 31% for the former and 34% for the latter. Regarding negative feedback, 14% of residents both thought the shops and transport system were bad, which was double the number for negative feedback about education, at a mere 6%.

Over the span of three decades, the data for all aspects considerably changed. In particularly, the opinions of healthcare services and shops were increased, to 83% and 81%, in turn holding the top ranks. Conversely, opinions regarding the environment and accommodation decreased, with the quantity of negative opinions climbing to 20% and 18% respectively, much higher than that of healthcare with at only 7%. Lastly, neutral opinions related to all aspects dropped significantly over the 30 year period.