IELTS Ac. Writing Task-1 Questions with Answers – FREE Line Graphs
In Progress
You should spend about 20 minutes on this task.
The chart shows the changes that took place in three different areas of crime in Newport city centre from 2003-2012. Summarise the information by selecting and reporting the main features and make comparisons wherever relevant.
Write at least 150 words.

This graph illustrates how crime rales altered in Newport inner city during the period 2001-2012. We can see immediately that the greatest change occurred hi the number of burglaries, while incidents of theft remained low hut steady.

In 2003, we can see that burglary was the most common crime, with approximately 3,400 reported cases. The figure rose to around 3,700 in 2004, but then there was a downward trend until 2008. At this point the figure stood at just over 1,000 incidents. This rose slightly in 2009, then continued to fluctuate for the remaining period.

In 2003, the number of cars being stolen stood at around 2,800 and followed a similar trend to burglary until 2006. At this point the number rose, standing at around 2,200 in 2007. There was a marginal decrease in the following year, but from then on, the trend was  generally upwards.

You should spend about 20 minutes on this task.
The graph below shows the percentage of Australian exports to 4 countries from 1990 to 2012. Summarise the information by selecting and reporting the main features and make comparisons wherever relevant.
Write at least 150 words.

The given line graph illustrates the proportions of Australian products exported to four countries between 1990 and 2012.

In 1990, Japan was the leading export market of Australia, receiving over 25% of all exported goods. China, however, received only a mere 5%. By 2012, the percentage of exports to Japan had dropped to below 20%, while the figures for China saw a dramatic rise to almost 30%.

was around ten times higher than the exports to India. Over the following twenty-two years, the figures for the US ﬂuctuated, and dropped to 5% by 2012. The percentage of exports to India, on the other hand, remained unchanged until 2000, and then increased to about 7% in 2010, before dropping slightly to roughly 5% in 2012.

You should spend about 20 minutes on this task.
The graph below shows the number of enquiries received by the Tourist Information Office in one city over a six-month period in 2011. Summarise the information by selecting and reporting the main features and make comparisons wherever relevant.
Write at least 150 words. 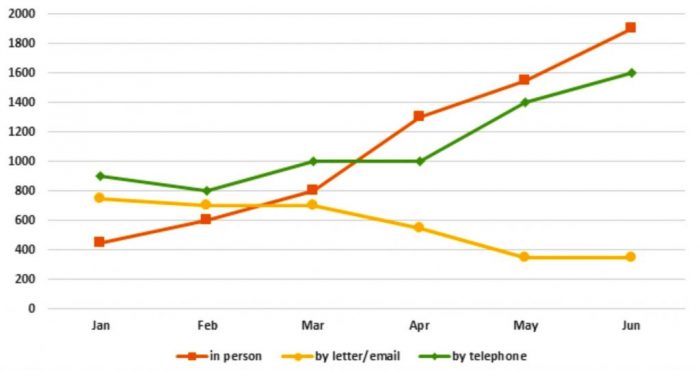 The line chart illustrates the number of inquiries sent to the Tourist Information Office in a particular city via three means of communication, between January and June in 2011.

It is clear that visitors to the city made more inquires in person and via telephone, while written letters and emails became the least common choices. Additionally, the number of enquiries in person experienced the most dramatic change among the different options.

In January, the Tourist Information Office received 900 telephone enquiries, while just under 800 letters and emails were received. Not many tourists chose to ask for information in person, with just over 400 queries. Over the next three months, the telephone still remained the most popular method of enquiry, at approximately 1000 queries.

Meanwhile, the number of enquires made in person saw considerable growth to 800, surpassing the figures for emails and postal enquires. From March to June, enquires in person were the most common method of inquiry. By June, the number of in person enquires soared by more than 1,000 to peak at 1,900. During this period, there was also a significant rise in the figure for telephone enquiries, from 1000 to 1600. By contrast, fewer people sent emails or letters to make enquires, with slightly less than 400 enquires in May and June.

You should spend about 20 minutes on this task.
The chart below shows the Japan’s population by age groups starting in 1960 and including a forecast to 2040. Summarise the information by selecting and reporting the main features and make comparisons wherever relevant.
Write at least 150 words. 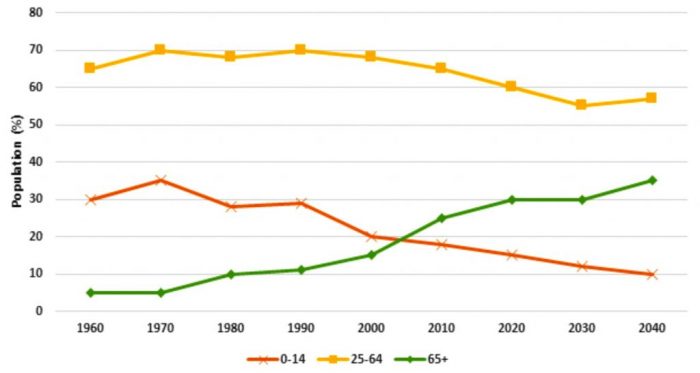 The line graph illustrates the percentage of the Japanese population in diﬀerent age groups from 1960 until now, and projections for the year 2040.

In contrast, the percentage of Japanese people aged 65 and above was only 5% in 1960. However, the figures witnessed a significant increase to just under 30% in 2018, and by 2040, it is forecast that approximately 35% of Japan’s population will fall into this age group.

You should spend about 20 minutes on this task.
The line graph below shows the oil production and consumption in China between 1982 and 2006. Summarise the information by selecting and reporting the main features and make comparisons wherever relevant.
Write at least 150 words. 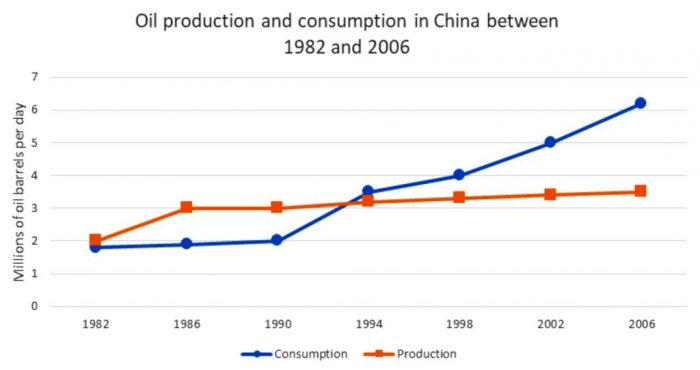 The graph illustrates how much oil was produced and consumed every day in China, over a 24-year period starting from 1982.

Overall, China witnessed an increase in both the production and consumption of oil over the period shown. However, oil consumption rose significantly faster than that of its production.

From 1990 onwards, the amount of oil that was consumed per day saw steady growth to end up at just over 6 million barrels. Meanwhile, the rate of oil production continued to increase from 1990, but only marginally, ending up at approximately 3.5 million barrels per day in 2006, which was significantly less than the countries consumption rate.

You should spend about 20 minutes on this task.
The line graph gives information about the number of international conferences in three cities. Summarise the information by selecting and reporting the main features and make comparisons wherever relevant.
Write at least 150 words. 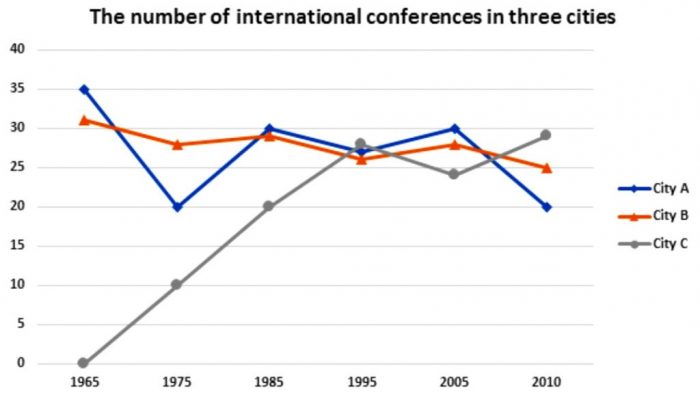 The line graph illustrates the number of international conferences held in three diﬀerent cites, over a period of thirty-six years, beginning in 1965.

It is clear that while the number of international conferences held in city C increased dramatically, there were some ﬂuctuations in the figures for the other cites over the period shown. Additionally, city C saw the biggest change in its figures.

In 1965, city A held about 35 international meetings, which was the highest figure for all cites in all years, while just under 30 conferences were organized in city B. In contrast, there were no international conferences in city C in that year.

Over the next 35 years, the number of international meetings that took place in city C rose sharply to peak at over 30 in 1980, and then fell slightly before rising again to around 30 in 2010. The figures for the other cites, however, both witnessed some ﬂuctuations throughout the period, both holding approximately 25 conferences each in the final year.

You should spend about 20 minutes on this task.
The chart below shows the price in Euros of 800 grams of four types of bread in one European country from 2001 to 2006. Summarise the information by selecting and reporting the main features and make comparisons wherever relevant.
Write at least 150 words.

The line graph illustrates the price of 800 grams of various types of bread in a particular European nation over five consecutive years, starting from 2001.

It is clear that while the price of brown, white and rye bread increased, the price of wholegrain bread witnessed a wild ﬂuctuation over the period shown. Additionally, the figure for brown bread saw the biggest change.

From 2002 to 2005, the figures for rye bread and white bread both increased considerably to 1.3 and 0.7 euros respectively, while there was a substantial drop of 1 euro in the price of wholegrain bread in 2005. Meanwhile, the price of brown bread ﬂuctuated wildly between 1.4 euros and 1.6 euros throughout the period.

You should spend about 20 minutes on this task.
The graph below gives information about U.S. government spending on research between 1980 and 2008. Summarise the information by selecting and reporting the main features and make comparisons wherever relevant.
Write at least 150 words. 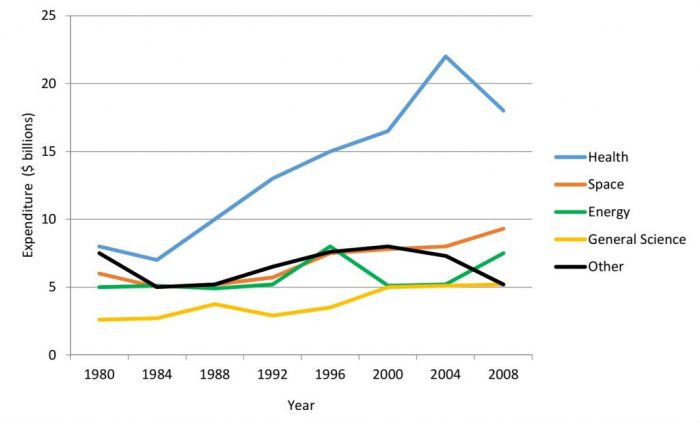 The line graph provides information about the U.S government’s expenditure on research in five fields (Health, Space, Energy, General Science and Other) over the period from 1980 to 2008.

You should spend about 20 minutes on this task.
The line chart below gives information about the percentage of female members of parliament in European countries (2000 – 2012). Summarise the information by selecting and reporting the main features and make comparisons wherever relevant.
Write at least 150 words. 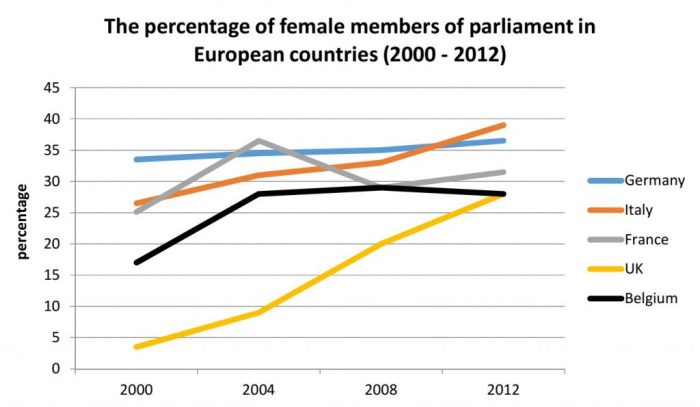 The line chart illustrates the proportion of female parliament members in Germany, Italy, France, the UK and Belgium from 2000 to 2012.

In general, all countries experienced an upward trend over the period, with Italy being the country with the highest percentage of female parliament members in 2012.

The percentages of female members of parliament in Germany and Italy were always higher than those of the other three countries however they also experienced a similar trend. While the figure for Italy rose from 27% to just under 40%, that of Germany increased by only 4%, to be at about 37%, during the examined period. Starting at 25% in 2000, the proportion of female parliament members in France increased at a similar rate to Germany, to end up at approximately 32% in 2012.